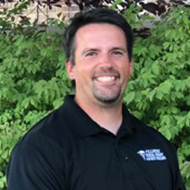 Dr. Dustin Kunz was born and raised in Fillmore, UT. After graduation, he served a two-year LDS mission in Tacoma, Washington. Upon returning home, Dustin received an Associate’s Degree from Snow College, a Bachelor’s Degree from the University of Utah, and completed a Doctorate of Physical Therapy Degree from West Coast University in Los Angeles, CA.

When it’s time to play, Dustin enjoys spending time with his family going up the canyon or hiking around. He also enjoys being a coach for the high school football team. He loves competing, even if its stupid (once got into a rock throwing contest when ammo ran out and he was tied with a friend in clay pigeon shooting. You guessed it, he lost. It wasn’t an actual event, just a Tuesday. He also loves weightlifting and conditioning. So much so that he received a certification as a strength and conditioning specialist, CSCS. He is married to Kaylee Kunz and they currently live in Fillmore.