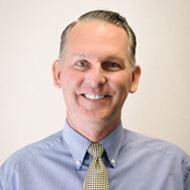 Dr. L. Howard Quackenbush II P.T., D.P.T., ATC, CSCS is the owner and director of Delta Physical Therapy and Sports Medicine. He loves the rural area and has the opportunity to be closely involved with his patient’s both in the clinic and the community.

Howard was raised in Payson, Utah and is the oldest of 9 children. He attended Payson High School and later Brigham Young University. He originally thought Mechanical Engineering was his path in life until the first classes in this major when he quickly found this was not his peer group. Shortly after this, he suffered a knee injury and underwent surgery and rehabilitation prior to his LDS Mission to Venezuela.

Upon returning from Venezuela, he re-injured his knee and again underwent surgery and Physical Therapy and found that he was fascinated by the body’s ability to heal and regain function. His Physical Therapist was instrumental in guiding him forward into this career path.

After BYU, he was accepted at Washington University School of Medicine’s Program in Physical Therapy for a Master’s Degree. During this education, Howard had opportunities to gain additional education in Sports Medicine with Professional Baseball and The National Hansen’s Disease Center in Carville, LA (Leprosy and Diabetes). He successfully completed this program and passed the exams and Licensure in 1994.

He began working for Intermountain Healthcare in Delta as a staff Physical Therapist in December 1994. Where he was able to grow and develop in the profession.

In 1996, Howard completed and passed the exams for the Certified Strength and Conditioning Specialist (CSCS)

In 1999, he had the opportunity to buy the clinical program from IHC and privatize the care. This was formalized and Delta Physical Therapy and Sports Medicine PC was opened in 2000.

In 2002, Howard was invited to use his Physical Therapy and Athletic Training skills in the Salt Lake City Winter Games (Test Games and Olympics) by working with the Figure Skating and Short Track Speed Skating events.

During this time, Physical Therapy advanced to a Doctorate level profession. He knew he would practice for many more years and elected to go through a Transitional Doctorate in Physical Therapy through Rocky Mountain University of Health Professions. He graduated with his tDPT in August 2004.

Howard is married to his sweetheart Tonya Bunker and they have an active and growing family.